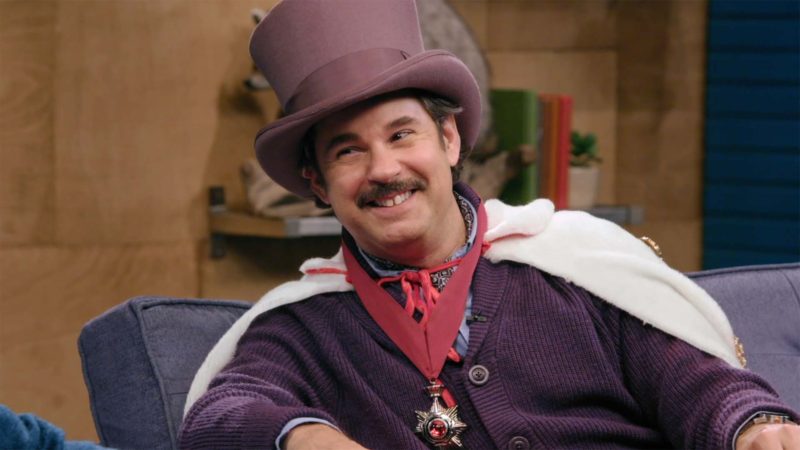 Scott receives some disturbing news that may mean the end of Comedy Bang! Bang! forever. But before the end, old chums Lord Andrew Lloyd Webber and Fabrice Fabrice stop by to wish the gang goodbye.

Yeah, I agree. The first season sucked. A good 4 years isn't bad though!!
I couldn't tell a dirt clod from a plate of caviar.
Top

Yeah, I agree. The first season sucked. A good 4 years isn't bad though!!

Yeah, first season was rubbish, second was a bit so-so. Bet Season 3 only became better because you stepped in. (Damn that Andy Guler-whatever, it was you who did the best work surely!)
aaaa

My face lit up upon seeing Paul F. Tompkins as Andrew Loyd Webber. But my face fell upon realizing this is the series finale.

Oh, I was just kidding, assuming you had miscounted.
I couldn't tell a dirt clod from a plate of caviar.
Top

Oh, I was just kidding, assuming you had miscounted.

Season one is my absolute smurf I love it sooo mUCH and I will FIGHT anyone who doesn't think it is good because it is literally THE BEST
Weird Al Yankovic is one busy daddy
YANKOCHICK NEWS NETWORK: http://www.youtube.com/channel/UCUOwVDpf5zQrXyKPPJWxs-Q" onclick="window.open(this.href);return false;
I abused my power and learned nothing!
-Alicia
Top

TMBJon wrote: Oh, I was just kidding, assuming you had miscounted.

I disagree with you. Fight me.
aaaa

What a finale!
Starting it out with them running out of ideas is what leads to the show ending was genius.
“I hate to bring it up Scott, but even that’s something you’ve said multiple times before.”
Al actually having something in his eye
"Six seasons and and a movie, or five seasons and then a sixth season on a streaming service that put the whole thing out of business."

As a baseball fan, I loved "the newest season of Major League Baseball" joke
"I’ll go back to my job of being rich and famous"
The discussion of the Water World Show at Universal was great.
LOVED the discussion of the Jeffrey Dahmer musical
The script Scott to Spielberg
I dropped the “Ouch” from my last name when I went to do show business. Too "ethnic"
Like the monarch’s toilet, I’m royally pissed
Slow Joey betting his paycheck on if the Tony’s are happening that weekend
"After 110 episodes, only half of which had to do with time travel."

"Our most loyal viewers. Barack and Michelle, whatever the three of us do next, I’m sure it’s gonna be great."
CBB will never end, because movies and TV shows are still being made. And we can just rip them off for their plot lines
Bob Odenkirk!
"But then nobody will see it." "Exactly! Nothing has to change!"

Perfect way to end the series, really. The show will still go on, just with no cameras.
And Peggy
Top
Post Reply
9 posts • Page 1 of 1