This week is a really solid double header, starting with
Joe Jonas Wears a Maroon and Gold Letterman Jacket with White Sneakers


Joe Jonas shows off his curious cellphone replacement, while Scott hosts a memorial for his old friend. Maxwell Keeper discusses his place of employment, and we get a sneak peek of Scott’s new movie 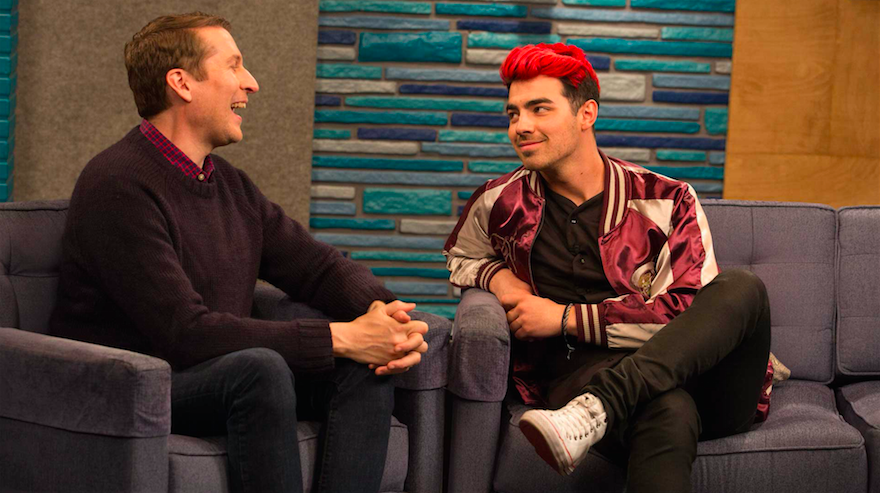 Dude what??? He has Markiplier hair!!!!!! I didn't know there were guys outside of Youtube who did this with their hair omg I might have to like Joe Jonas on a further level now Is Joe the one who dumped Taylor Swift on a 27 second phone call?
Seems appropriate I guess.
Weird Al Yankovic is one busy daddy
YANKOCHICK NEWS NETWORK: http://www.youtube.com/channel/UCUOwVDpf5zQrXyKPPJWxs-Q" onclick="window.open(this.href);return false;
I abused my power and learned nothing!
-Alicia
Top

I love how CBB brings on guests that always surprise me with just how funny they can be. I wouldn't have expected T Pain to give any performance at all, but he was terrific. Joe Jonas is someone who would give me a bit more hope, but still not a whole lot. Very excited for this episode.
And Peggy
Top

A preview clip from this week's episode with Joe Jonas:
https://twitter.com/ComedyBangBang/stat ... 8064708609" onclick="window.open(this.href);return false;
I couldn't tell a dirt clod from a plate of caviar.
Top

Back when Scott was in his "earlier 20's"
That name gag was "Repair Man Man Man!" That's a reference I haven't even thought about in years! Haha. Jon, do the editors come up with the gag, or did the writers? I've been curious but never asked.
Two Mints In One.
Would you like to suck on these?
The entire Powerball bit was great.
"I thought I put my bird on silent."
Joe Jonas throwing the bird over his shoulder as the show was cutting to commercial.
"You've been doing this same thing every dance since freshman year!"
"Opening the same day as Star Wars Rogue One." = Probably my favorite joke of the episode.
"You're just a guy that calls people and bothers them every 10 minutes."
"I wonder what this would sound like being played on a laptop that hasn't been invented yet.
"Al, wanna join us? We're singing a song parody." "Aw, how can I resist?"

Big Spoon wrote:That name gag was "Repair Man Man Man!" That's a reference I haven't even thought about in years! Haha. Jon, do the editors come up with the gag, or did the writers? I've been curious but never asked.

The Post team has a google doc where we write down pitches for fake Scott names. Whoever edits Act One gets to pick one from the list. Scott of course gets veto power and has turned down some in the past. This one, incidentally, is one that I pitched. I've had a few go in over the years including Koosh Rubberstrand and Ska Checkeredvans last season.
I couldn't tell a dirt clod from a plate of caviar.
Top

TMBJon wrote: This one, incidentally, is one that I pitched.

Speaking of the writing on this show, how much of it is Al involved in? The Real Food/mansion sketches seem very much like things Al could've written himself.
Last edited by Killingsworth on Sat Jun 25, 2016 11:36 pm, edited 1 time in total.
Life is a bowl of three-legged salamanders swimming around in an infinite ocean of strawberry jello...
Top

Al isn't involved directly with any of the writing, other than what he improvises on set. But a lot of the CBB writing staff are fans of Al, so they wrote those sketches with him in mind.
I couldn't tell a dirt clod from a plate of caviar.
Top

I liked the bit at the end where they're doing the group hug and Scott asks Al if he wants to join in and Al goes "Not particularly".

And then Scott entices him with the prospect of a song parody, which works because of course it does. Now, me being me I have no idea what song they were actually parodying but it was a nice sounding song.

I also had to laugh at Al's Spider-Man webshooting noises going on for way too long.

And of course it's always funny to watch Scott trying not to laugh at his comedy guests.
Love and peace.
Top
Post Reply
16 posts