I was #15 in line in the Twin Cities on the first day of Al's tour for My New Teacher and Me.

The people at Joseph Beth did not get a good picture, they were trying to rush people too much but.........

There´s no excuse for that. With a digital camera, you know right away that it´s blurry.
Top

I was glad there were no windows in the background for my photo with Al -- messes up the exposure. Good point, OE -- try to warn your photographer ahead of time to check. I asked mine (my daughter) to take two, "because I always blink". Silly me, I didn't follow my own advice when I took hers, but I was lucky and it turned out better than mine.

Flat Stanley NH wrote:Here is photo of Al and me after the show in Hampton, NH, on October 5, 2013.

Did you lose weight?

My third time meeting Al. Looking forward to many more! 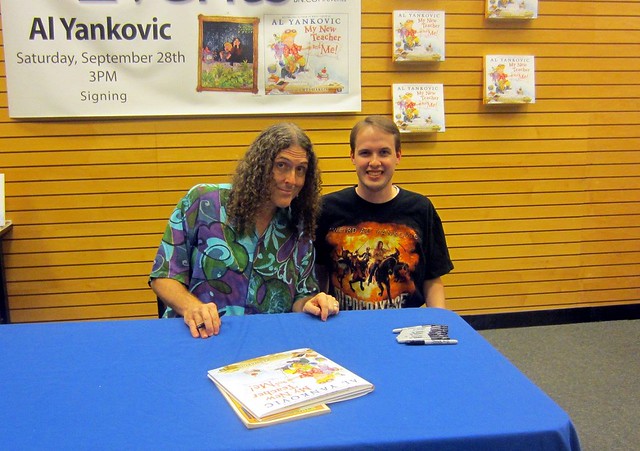 http://bit.ly/17daNhh" onclick="window.open(this.href);return false;
At the Rialto Theatre in Joliet.
Top

Revitalising this thread! Was hoping more of you regulars would have pictures to share, especially after the Mandatory World Tour.

I know I've posted this before on this forum, but here's me when I met Al back in October.

Well, okay! In that case, I'll post some of mine from this year. 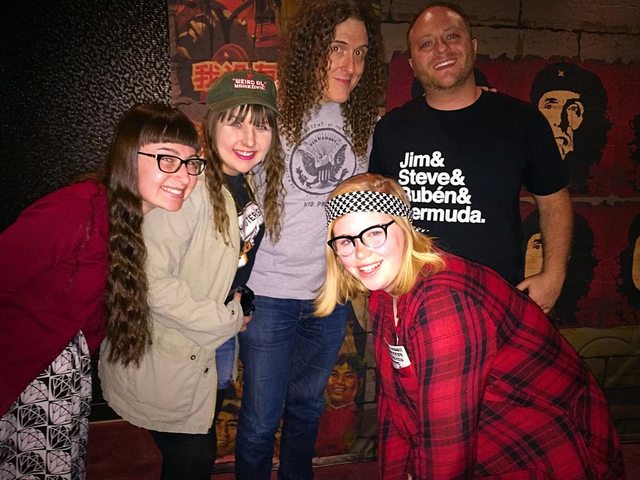 With Amerah's friend Shelley (ShellWearsRocketDogShoes(or something?) from back in the day, aka Skelly Bones), me, Al, Jon (TMBJon), and Amerah (amzo39)
(Al said he did not recognize me without the chicken hat, so I brought it back the next show I went to.) 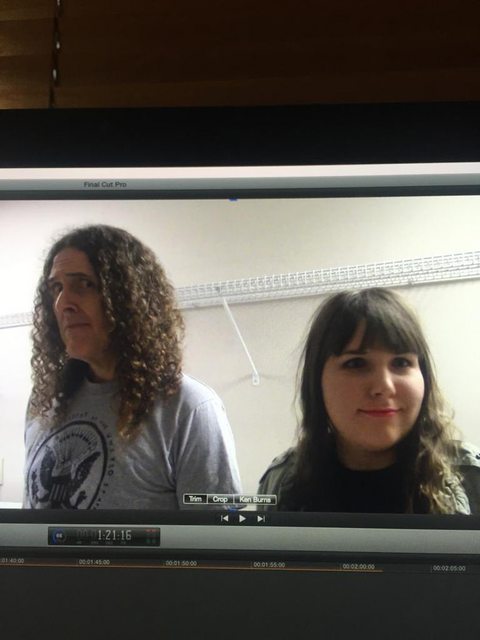 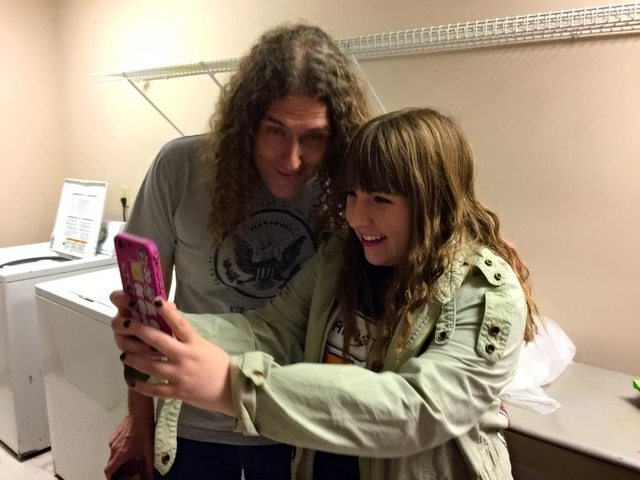 (Jon took this one and I love it a lot.

My mom printed out this picture amongst other family pictures to frame around the house but this one did not make the frame, so it's right next to my bed without a frame instead.) 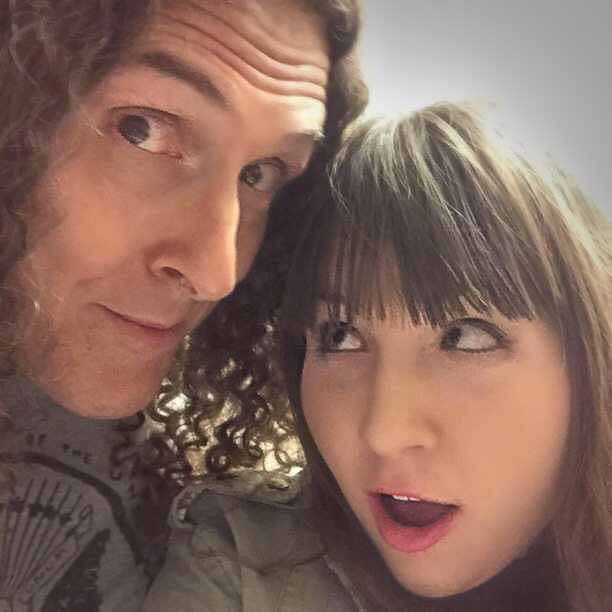 (Selfies are the only way to go, unless JW makes you give him your phone. Also! Before I took this picture, I nervously asked Al if we could take a selfie since he had just filmed the bit for the WOWAY Awards with us and I felt weird asking for more from him, so I was kinda awkward about it, but then he kinda mimicked me and went "okay..!" which made me all flustered from the way he said it and I hate him but I love him always. ) 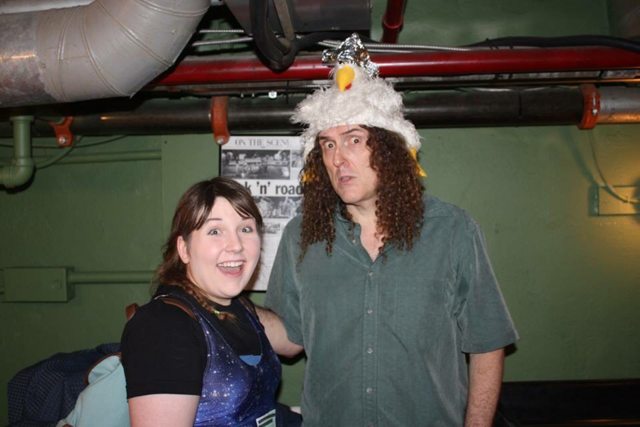 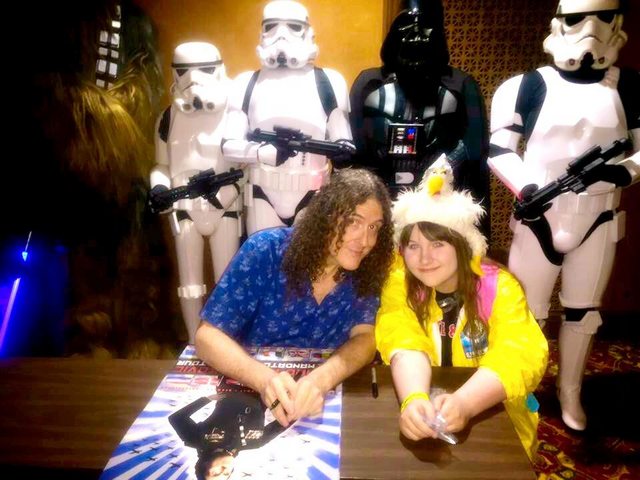 (Adrian (Jiggawatt), Anne (Alfanne27), and Dave (Elvis) were waiting for me outside and we had like three hours worth of a car ride back to NJ, so I kinda ignored the rules JW said and went for the front of the line so they didn't have to wait for me all night. When I went up to Al he was like "hey, good to see you" and then about the poster "is this for you?" which made me stop and think for a second if the poster was for me, but I couldn't immediately think of anyone else it would be for so I was like yes Al it's for me. So we took a pic and I moved to the other side while he signed the poster to "move the process along faster" and when he was done signing, this 12 year old boy came up to him and started saying something about "Mr. Yankovic, I [words of fandom]" and asked him to sign something and I was kinda like oh ok am I supposed to be done now but Al turned to the boy was like "ok, just a minute" and looked back at me and thanked me for coming out and other niceties and I was like 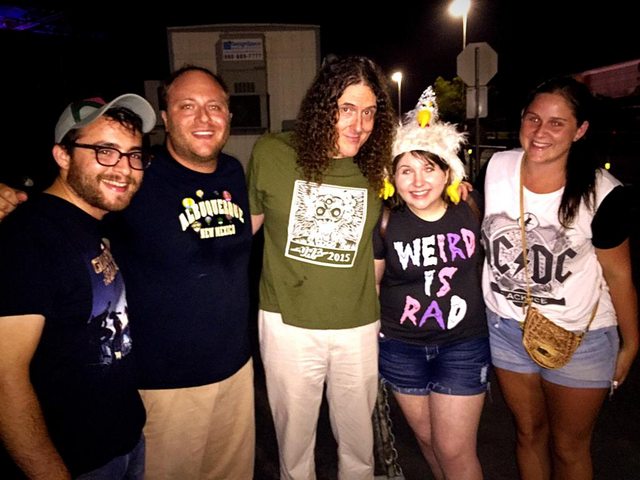 With Drew (MandatoryFun), Jon (TMBJon), Al, me, and a cool girl from New Zealand we told to join WOWAY but I guess she never did.
(He held onto me for a little while after we took the picture.

ALSO this is the night when he made direct eye contact with me as he told us about the moshing in 1992 during Smells Like Nirvana. This was a good night.)

And here's that picture as an emoji mosaic! 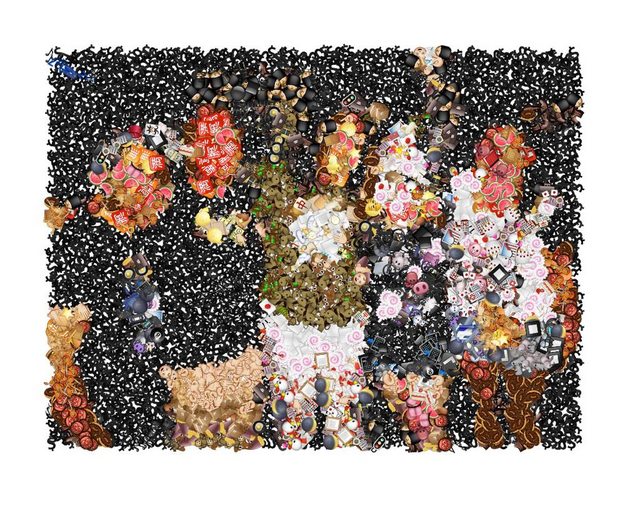 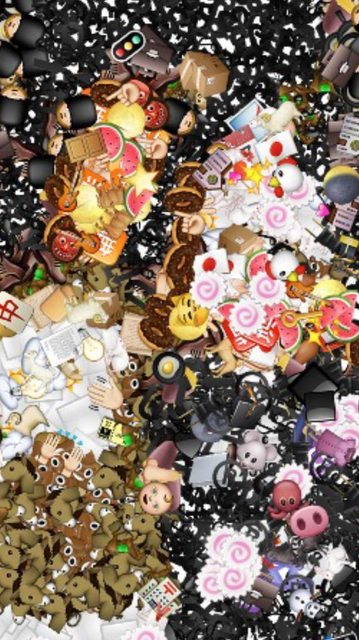 don't we look so good together

(I love that it put chickens in my chicken hat)
(and the horses on Al are for Bojack Horseman)
Weird Al Yankovic is one busy daddy
YANKOCHICK NEWS NETWORK: http://www.youtube.com/channel/UCUOwVDpf5zQrXyKPPJWxs-Q" onclick="window.open(this.href);return false;
I abused my power and learned nothing!
-Alicia
Top
Post Reply
153 posts