Weird Al Yankovic takes a selfie in the exhibit hall, 2000. (Photo by Neal Hamilton courtesy of the Rock and Roll Hall of Fame and Museum)

Weird Al Yankovic takes a selfie in the exhibit hall, 2000. (Photo by Neal Hamilton courtesy of the Rock and Roll Hall of Fame and Museum)

It would still be a selfie whether it was called that in 2000 or not.
Talking about music is like fishing about architecture- FZ
Top 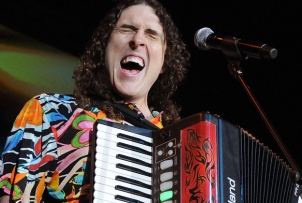 20. Weird Al Yankovic: It’s quite likely that some readers think Weird Al is placed too high, or maybe should not be on the list at all. Let me explain my case as best I can. Tom Stoppard’s play Arcadia takes place across several decades, and in every scene features a tortoise, the sole creature with the longevity to witness to the entire narrative as it unfolds. In a lot of ways, Weird Al was like that tortoise. As trend after trend unfolded, as political and cultural events marched through the landscape of history, as movies and television shows came and went, Weird Al was there, resiliently bursting their bubble and busting their balls. Some of the acts he lampooned were ushered into the rock and roll pantheon: Nirvana, Madonna, and Green Day are but a few of the artists whose legitimacy was validated by the fact that Weird Al made fun of them. Others fell by the wayside, as he parodied forgotten mooks like Men Without Hats and Gerardo. But the craziest thing of all was that Weird Al kept getting better. Eventually the songs about food and television gave way to funny, but slyly insightful material. “Party in the CIA” took on the national security state in a way no serious song could. “Whatever U Like” was the smartest take I heard on the 2008 economic collapse, and “Skipper Dan” was a strangely affecting meditation on broken dreams, where a Julliard-trained actor ends up as the guide on Disneyland’s “Jungle Cruise.” Way back in my intro to this series, I described one of my chief criteria as “zeitgeist,” the ineffable quality of representing one’s time. Almost every person who was a fourteen-year-old boy at some point between Al’s debut and the present remembers a time when he was the funniest person he knew. Watching the video for “Amish Paradise” for the first time was one of my ten most cherished music memories of all time. And other people can say the same for the first time they heard “Eat It” or the time they came across “White and Nerdy” on youtube. Last year, Al debuted his last conventional album from a brick-and-mortar record label, ending an over 30-year trajectory where he entered our homes through MTV, and concluded with Mandatory Fun. Al realized that he had even managed to outlive the record industry itself. Al is the tortoise, man. Al is the tortoise.
Top

I went to the Rock HOF in 2000. I learned about the Sex Pistols.

In 2016 they nominated Janet Jackson. I never felt so old.
Top

Any chance Weird Al is giving the induction speech for Dire Straits? No one knows what's happening with Dire Straits yet. The presenters for all the other inductees have been announced.
Top

Yankovic-Gretzky wrote:Any chance Weird Al is giving the induction speech for Dire Straits? No one knows what's happening with Dire Straits yet. The presenters for all the other inductees have been announced.

I would say zero chance. Al will still be on tour when the ceremony happens.
The issue with the Dire Straits has to do with all of the members, Mark Knopfler especially, having seemingly zero interest whatsoever in the honor. Knopfler has yet to comment publicly since they were announced as inductees.
I couldn't tell a dirt clod from a plate of caviar.
Top

He probably really doesn't care. The fact that it's only happening now is dumb just like all of the bands they induct way to late. Green Day is the only band that went in so young and deserved it so much. Not that mid 40's is that young when we're talking rock and roll years. The list of bands not in there is just pitiful. I doubt Al would care that much either, sure it's an honor of course, but still at this point, we'll all be dead.

The Rock & Roll Hall of Fame on Tuesday announced its nominees for induction into the 2019 class, and it's a mix of new and old candidates. It's the first time Def Leppard, Devo, John Prine, Roxy Music, Stevie Nicks and Todd Rundgren have made the list. Rapper LL Cool J and the group Kraftwerk have made the list four times before. Other nominees this year are Janet Jackson, MC5, Radiohead, Rage Against the Machine, Rufus featuring Chaka Khan, The Cure and The Zombies.
Top

There are some great options on the list this year, but the Rock Hall will undoubtedly find a way to bungle it by snubbing all the good ones again. And how did they manage not to nominate first time eligible candidate BECK???? Last year's show was a complete farce with half of the acts not even participating.

Now that Al got his star, we should move all "Al activism" efforts to this project...
I couldn't tell a dirt clod from a plate of caviar.
Top
Post Reply
240 posts