I saw that video earlier today. I had been wondering how Al did that. I thought maybe they'd have the music playing quietly or something so he'd know when his cues are, but the fact that it's a cappella and that he's just doing it in his head is amazing. I can't believe that he's never off cue when he can't even hear the music. Al is truly one of the most talented and hardworking people out there. (If not the most talented and hardworking.)
Concerts: 5/30/15
6/24/16
3/25/18
7/06/19

This was my view for the first few songs: 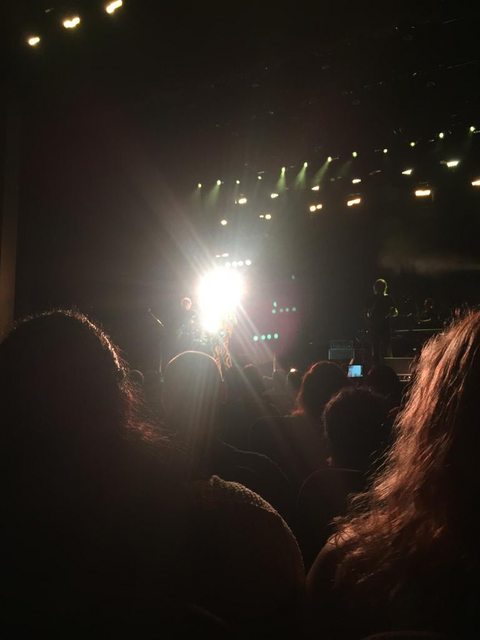 It got reeeeally bad for us during DTBS. The pink lights flashing like they did made my eyes act like I was about to pass out or something.

With all the feedback I'm getting it looks like Chris (epileptic friend) is either going to be watching DTBS through really dark douchey sun glasses or not at all. I think we'll get him douchey glasses to wear during the show because it's cooler that way.

So, I was one one of the suckers who missed my opportunity because of the "dummy bus" even though that was EXACTLY where he came out to on the last tour.

Waited over an hour then found out too late that they weren't taking any more people for M&G. I'm sad and hurt that the staff walking in and out never said ANYTHING to us to let us know despite making eye contact several times. I guess my question is, how did others know that he'd be on the opposite side this tour? I'd like to learn the secret so I don't wait for nothing and miss out again.

KatrinatheGood wrote:With all the feedback I'm getting it looks like Chris (epileptic friend) is either going to be watching DTBS through really dark douchey sun glasses or not at all. I think we'll get him douchey glasses to wear during the show because it's cooler that way.

Definitely get Kanye style shuttershades to stay in theme with the opening number!

i loved being in the friends pic in the fountain. just glad the police didnt stop by as who knows they wouldnt take too kindly on us standing in a fountain but it was so much fun regardless. JW is a good guy from the tour who works for al and has run all of his pre show parties and post show pic taking for the meet & greets. fans had issues with him in the beginning but as he got to know the fans he is now liked by a lot of fans.
Top

The black bus is the crew bus, the colored one is Al's. Others would know this from attending other shows as it is not the same bus every tour but once you know it, it's hard to miss it. Too bad that you guys weren't told by people who worked there and Al was actually doing a signing at the other bus around the corner, I would be upset too. But the show still rocked hard right? Actually anybody working for the venue probably wouldn't have had a clue that it was happening since they don't work for Al and probably weren't told.
What a racket they're makin', Jack, they keep me up at night playin' their electric guitars!!
Top
Post Reply
50 posts