Council Bluffs right near the Nebraska border! These midwest shows all have some of the best crowds!
Top

According to Ticketmaster, tickets for this show won't go on sale until April 7th:

Woot! Sporkman and I attended the show together (it's the return of Spork and Cindy) last night. Fantastic show, of course. It ran without a hitch. We got there a few hours early as it was general admission, so our party got some good spots in front of Jim.

I got my hand slapped during Tacky and some Nirvana water on me later. Sadly, WBUL got cut as this was an odd venue to do it at. There are no seats at this venue. It's standing room only at the front while the back is just people sitting in lawn chairs they brought or blankets. There was no way for Al to really go into the audience. :-( It was a sold out show too, so not much space to go between people if he tried.

I really loved the unplugged medley for musical love and it's really easy to get pictures of the entire band up close. :-D

There was an autograph signing after the show, but there were a lot of people waiting, so I'm even surprised they did that. You handed your one item to the staff member, they handed it to Al, and then staff member handed it back to you. Al didn't even look up, so it was rushed and you could feel it too.

Al never fails to put on a good show anyway and I was definitely having a good time. It was great to hang out with Sporkman and his brother too. Great company and a great performance.
Top

Cool! 2nd show I'm going to will be set up like that too so I am guessing WBUL will be cut for that too. That could be worse, seen that live many times.
What a racket they're makin', Jack, they keep me up at night playin' their electric guitars!!
Top

Yep! Awesome experience all around, apart from the weirdly impersonal autograph signing. It was fun hanging out with Cindy again!
Top

So, this was my first Al concert (his tours hitting Nebraska is pretty rare for some reason). I had a wonderful time. I spent the first 45 minutes in the casino's lounge balcony and it was alright, but it sounded SO much better when I moved down into the standing area for the second half of the show.

I've only seen one other concert at this venue (the Arctic Monkeys) and this show was packed compared to that.

I also had a hotel room right behind the stage and because I was late getting down to the concert, I got an interesting perspective for the intro: 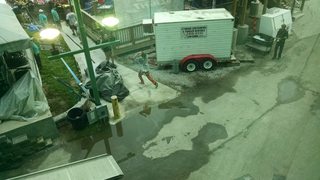 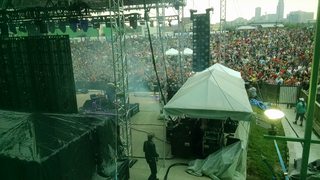 That's awesome. A very interesting perspective indeed! At least you didn't miss it.
What a racket they're makin', Jack, they keep me up at night playin' their electric guitars!!
Top
Post Reply
8 posts • Page 1 of 1