Since a leak is inevitable at this point, my request would be that this forum doesn't turn into a where/how to get it guide.

There's nothing we can really do, but it does come down to respect (And the fact that one of the guys we should show that respect to is kinda right here on this forum).

And be aware that other members still don't want to know anything until Tuesday, so if sharing song information that's not publicly known, keep it in spoiler tags
You have quickly thought up such matchless phrase?
Top

Marko_The_Odd wrote:I only have one question:
From listening to the album, do you have any idea what song Patton Oswalt was talking about, and who the mysterious "band that he's worshipped since the 90's"/"MOST respected MOST influential 90's outfit" is?

Here's the last thing I'll share with you...hopefully it's all the proof you deserve.

If this were any other band I'd be like "screw em, here it is!" but this is AL and he works so damn hard. I'd prefer if you kept the contents of this pic to this thread specifically since it spoils the polka. 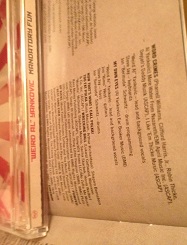 I guess this is my Lame Claim to Fame.

Now that's a fun tease. We get a little bit of info without anything being too spoiled. The polka targets are very hard to make out. The only one I can see for sure is

I can also see

Spoiler:
Pumped-Up Kicks by Foster The People and Best Song Ever by One Direction.

I can also see that

Spoiler:
unfortunately, My Own Eyes is NOT the Amanda Palmer track. Dang, I was so hoping for that.

Haha no, I'm not Al. I only posted to let people know that your old friend the local record store might just have a surprise for you if you're persistent and/or lucky. Today, I just happened to be very, very lucky. And I'm not gonna lie - it's killing me that I can't discuss it with you (talk about first world problems, I know!). However, if I have a copy, it stands to reason that somebody else out there can find it and, if they desire, share it. But it won't be me, so you can stop refreshing!!


Spoiler:
Can you believe Fancy required SEVEN songwriters?! Giving "Handy" a whopping 8 songwriters. I mean, that has to be some kind of record? Also, I was going to make a similar statement about "Inactive", until I realized one of the songwriters credited is named Benjamin Arthur McKee Joshua Francis Mosser. This wasn't a very good spoiler, eh?

Just a reminder, you are not allowed to post mp3 files, torrents, download websites, etc., or links to such, etc. on the forum. This is not a file trading site. If you want to be a hooligan, you'll have to do it elsewhere.

Hey folks, this is the spoiler updates topic. Can you please move the speculation and chit chat to the speculation topic, and leave this topic for actual spoilers, with spoiler tags?

Also as previously noted, this forum is not for things like file trading or posting links where to hear the album. Take that elsewhere.

edit: Just split out the chit chat. Please use the other topic for chit chat.
Last edited by Elvis on Fri Jul 11, 2014 3:43 am, edited 1 time in total.
Reason: split posts
Top

These are VERY minor spoilers except for one, which I will preface before we get there. 2 notes on the CD booklet, 1 note on the polka, 1 random lyric note, and ...confirmation of the style parody targets. Kinda.

Proceed with caution! Please do NOT mention this stuff in non-spoiler threads, but please also don't turn this into a discussion thread. Hmm, figure that one out.

BTW, I meant to mention it before, but some of you are phenomenal detectives/speculators. I enjoy this album way more having been a member of this forum for the past month than if I had just bought it fresh. I think everyone can form their own opinion of the album, but let's just say...I find it very hard to imagine any fan being disappointed.

First spoiler block contains mostly CD booklet notes, the polka "unspoiler", and a lyric note (for fun). The second block has a comment on the style parody targets.


Spoiler:
Alright, first thing I noticed is that despite there being 2 pictures of Ruben in the booklet, he's not listed as performing on any song nor is he mentioned anywhere! Poor guy! Next: the Thanks section most likely spoils all of the video directors and the guest stars.

Third: I guess fun weren't mandatory after all.

Fourth: Surprisingly, this album contains the second line of lyric in Al's catalog (or anyone's, I'm guessing) that begins with "No "x" in..."

Alright, that was all fairly minor, but this one is a legitimate heavy hint. You've been warned!


Spoiler:
I can't even spoil the style parody targets cuz Al already did! Kudos to whomever found that interview from last June.