I have my list of Rarities and other recordings not included on Medium Rarities, dubbed "Medium Rarities 2.0". What does everyone think? Anything I'm missing? I have peter and the wolf separate but if there's enough other stuff I'm missing, I may go into a Medium Rarities 2.1! Notes about some tracks:
Disc 1
Tracks 1-6, 8-11, 13-15, 17 are all home demos
Tracks 7, 12, 16 all from respective noted releases
Track 23 from Square One TV (bad TV quality but felt it had to be included)
Track 24 from Headline News Single
Tracks 25 and 26 from Gump Single

Disc 2
Track 1 from Gump Single
Track 2 Created by editing Buddy Holly verse into song from BHD CD
Track 3 from ...Billy and Mandy
Track 5 From Dog Train CD
Track 7 from Simpsons
Track 8 Al plays Accordion in background (Caspar Babypants)
Track 10 Al and the Roots
Tracks 11-14 from Al's Studio 360 appearance, unplugged recordings (Track 13, Radio Radio, is my favorite track on this entire set, a good recording of the "Something has gone wrong song" as I like to call it, great cover of Elvis Costello classic)
Tracks 17 and 18 from My Little Pony
Track 19 from Songify
Tracks 20 and 21 from Georgefest (in this order because I added a fade out to end of What is Life?)
Tracks 22-24 from Milo Murphy's Law
Track 25 I personally recording at his Port Chester, NY Mandatory World Tour show, so not the best quality but this song was a must!
Track 26 from the Alpocalypse Live DVD
Track 27 needs no introduction

Other notes: Yes disc 2 purposely has 27 songs, I was trying to do 27 and 27 but couldn't find a GOOD 27th song for disc 1, that fit the allotted 80 minutes.
Last three songs of disc 2 are out of order with good reason. 25 & 26 always marks the end of an Al concert to me and 27 ended Off the Deep End, so why not end this set with it! [There aren't 10 minutes of silence because it sadly wouldn't fit.]
Again, all thoughts and comments are welcome, and let me know if I may be missing anything! 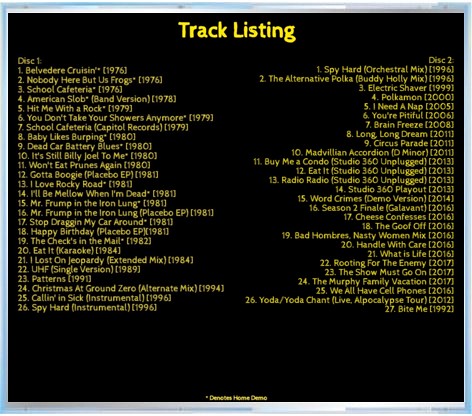