Oh. Well then. Another sarcastic remark wasted.
-Kevin
The Office: NBC, Thursdays at 9.
If you're not watching, you're doing yourself great injustice.
Top

I really don't see what you have against that pic, moap, but, to each their own. I think it looks great, and a lot like Sting.

Patti
4 words that Al said to me that blew me away:

I didn't say it was bad, I said it looked odd. I like it.
-Kevin
The Office: NBC, Thursdays at 9.
If you're not watching, you're doing yourself great injustice.
Top

Must've been a cheap single picture shoot. Whatever.


That is what made me think you didn't like it. Did you see the original pics, too? Al's is very well done so that it looks just like those. I'm glad you like it!


4 words that Al said to me that blew me away:

Do you mean you'd like to get "King of Suede" or the original Police single? I just ask because "Suede" is irritatingly easy to find around me. I'd go so far to say that it's perhaps the most common Al single behind "Eat It."

I meant I want the King of Suede single. I don't live near a record store, nor do I drive, so I would have to find an opportunity to get to one, or look on ebay or something. I just think it would be neat to have the single with that great cover art.

Ya know, this may be a good "Ask Al" question. As far as I can find out, there was a U.S. release of the picture-sleeved single for "King Of Pain" which had a B-side of "Someone To Talk To" [US AM 2569 PS], but the image is all geometric shapes.

Kinda hard to parody that. My guess is he took the three color band logo seen frequently in the Police's cover artwork, and added the funky Sting-like photo behind it.

Ah, yes! One more thing. I did find another interesting and obscure sort-of-cover-parody -- notice that the reverse side of the "King Of Pain" single picture sleeve has the three band members each with triangle crowns on them.

Now, the reverse of Al's "King Of Suede" single picture sleeve has a B&W image of Al from the In 3D album cover ... but he has a triangle crown drawn on him too!! 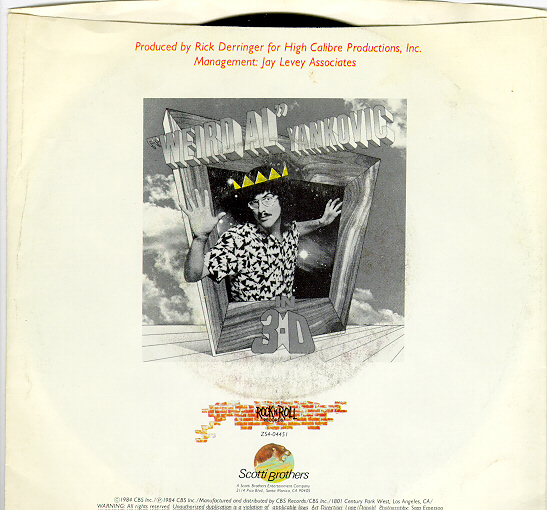 Yank27 @ May 9 2004, 01:28 AM wrote:Ever notice the reflection in Al's glasses? This is an obsevation my friend made shortly after he got the 45. I wonder what that is? It almost looks like a reflection of the camera used to take that picture; notice the shape of the white blotch in the corner of his left eye (it would be on our right side, btw). It's kindof umbrella shaped, like the things they use when they take your school picture, or at walmart or something. What's that umbrella shaped thing called? I know it guides the light so your picture doesnt turn out dark, but what is it called?

[or, more specifically, studio umbrellas], and they look like this.

These umbrellas are lined with a silver interior surface backed by a black backing which helps provide a soft, but highly efficient bounced light source for photography. They can also have a translucent backing for an even softer light reflection. I found this interesting site that shows how these umbrellas are used in photography for a variety of different lighting effects.

And actually, that same image of Al was used in a magazine article in 1984. The magazine was called Rocks Faces, and the August 1984 issue [Volume 1, Number 10] had an article on Al on page 36 entitled "From Rock's Lonely Lampooner: Weird Al Yankovic" by Keith Elliot Greenberg. It's a nice article [even tells how he and Tress MacNeille met for the "Ricky" video!], though its odd title makes you think it's somehow about Al's lovelife [and it's NOT]. The first page of the four page article [two of which are all pictures] has this image:

which when enlarged shows the details perfectly:

So, there you have it! To me, the big question is -- what's reflected in STING'S glasses on that promo pic??

[BTW-- the name of the photographer is Sam Emerson. I got it off the credits on the back of the KOS picture sleeve. This guy is one of the premier photographers in L.A. -- he has taken photos for the likes of Cyndi Lauper, Billy Joel, Fleetwood Mac, Barbra Streisand, even Michael Jackson! -- yet he gets himself in the shot?? One almost wonders if that was on purpose ...]

algonacchick @ May 10 2004, 07:15 AM wrote:I meant I want the King of Suede single. I don't live near a record store, nor do I drive, so I would have to find an opportunity to get to one, or look on ebay or something. I just think it would be neat to have the single with that great cover art.


Patti, as Greg said, the "King Of Suede" single is fairly easy to find -- on eBay. Now, although this link will be constantly changing in the days and months to come, if you click here, you ought to be able to find a copy here on eBay easily. I see it there all the time. Then you CAN own one of your own!!

Wow! Well, thanks, Dr. Dad. The pic of Al with the glasses and the funky Sting pic are enough for me. I guess Al incorporated the Synchroncity album art for the Police with that picture of Sting for his 45 single cover art. Cool! I will be searching on ebay for that single now!

You polka, Dr. Dad!
4 words that Al said to me that blew me away:

I can't imagine that Perfectionist Al didn't notice the reflection. It couldn't have been accidental. He probably wanted the reflection there because it is a parody of Sting's pic. I was wondering what that is reflected there too.

My other big question is why are the Eat It guys in the background?

It's probably because they were both on the same album and he wanted to do some cross-referencing.