I have done lots of art and stuff over the years, I plan on making some sort of new Al-related art again some time. Here's what I have done (that I remember)

-Sculpture of Al's face in clay (Personal favorite), made in 2008
-"Christmas tree Hat" drawing done to hang up on our wall during christmas of 2005(?)
-Various drawings of Al on flash, 2007-2008
-Cover of the Bathroom demo of My Bologna, 2007 (Not very good)
-Cover of "Flatbush Avenue", 2007 (I no longer have the audio)
-South Park Stop motion compilation, 2007 or 2008, set to "American Slob"
-South Park Stop Motion Megamix, 2009? Beginning set to "Babalu Music"
-Wall-E+Coffee=Madness, 2009, ending set to Baby Likes Burping
-Sweet Revenge, 2009 (Sequel to a stop motion about Wall-E and south park characters, credits set to "Headline News", "Polkas on 45" played briefly at the end before credits
-Animation loop for "You Don't Love me Anymore", 2007
-Animation loop of Al playing accordion set to "Flatbush Avenue" 2008
-Animation set to "Harvey The Wonder Hamster", with a chibi Harvey dancing in front of the Weird Al Show Set, 2008(?)
-Sketch of Al and Colonel Sanders' Floating head for a comic I never started called "Everything You know is wrong", 2005
-vocal cover of "Miniature Golf", made in September 2012
-Vocal cover of "Robert Hilburn", made August 2012


And that's all I remember. Some of these things aren't directly related to Al, but Al-related things are in them.
Top

minnick27 wrote:That shirt is awesome! The shoes are cool too, but the shirt!!

Thanks!! I figured the Alpocalypse sneakers would be more popular than the t-shirt (especially with Al and the band's autographs on them too), but I actually think I've gotten more comments on my t-shirt! I'm pretty happy with how it turned out, although, not sure if anyone noticed, but one of the checkers from Al's shoe went missing in the process of getting it printed (oh well!) It cost me $27.97, so I kept the receipt. As for those hand painted sneakers? I'm not saying how much they cost. They are the work of a professional artist, so they were NOT cheap. But worth every single penny? HECK yeah!!! Thanks again to Al and the band for signing them. I honestly didn't think I could love a pair of sneakers so much.

“Everybody is a genius. But if you judge a fish by its ability to climb a tree, it will live its whole life believing that it is stupid.”
― Albert Einstein
Top

Just realized that my Alpocalypse sneakers are now featured on the artist's website... yay! Props to Joshua, who did a great job.

http://airbrushtoronto.com/2012/10/airb ... -sneakers/" onclick="window.open(this.href);return false;
“Everybody is a genius. But if you judge a fish by its ability to climb a tree, it will live its whole life believing that it is stupid.”
― Albert Einstein
Top

Decided to throw this here. Saw this on Twitter and thought it was well done:

http://www.etsy.com/listing/103535303/weird-al-volution" onclick="window.open(this.href);return false;
Is my dude a dweeb?
Top

Wizzerkat wrote:Decided to throw this here. Saw this on Twitter and thought it was well done:

This was part of that print exhibition on Melrose that Al and Suzanne attended the opening of. I have a copy of it.
Top

I haven't been in here in a quite a while. I looked at every page and was reminded of all the cool artwork people have posted in here over the past 10 years! I also noticed that a number of links no longer work, including a few of mine. I know Bobbi was hosting my concert pics from 8/22/03. I can't access them anymore.

I do have a few saved in My Pictures, but not all of them. Someone wanted to make something using a photo, and Bobbi bragged on my SLN pic from that show*. Anyway...I posted this pic elsewhere, but it does belong here, too. I made this chocolate Al sucker 3 days ago. I'm in a photo a day group, and the day's word was "fun", so I went with this:

Ok, so, a lot of people asked me about the picture I've made - here it is. That's a diamond painting. So, it's, basically, a bunch of "diamonds" glued to a canvas.

The end. No-
For people who don't know where do the diamond paintings come from

- here's the explanation:
To make such a picture you'll require a pattern (similar to such used for cross-stiching), which can be made by a computer program or ordered from a company selling diamond painting sets. I found on the internet the most beautiful photo of Al and sent it to one of such companies.
After you got you set, which consists of the pattern(which is usually a canvas that is already covered in glue), tools, and the diamonds of required colors you just slowly one by one put them on the canvas. So, yeah, it is as simple as that. It took me about 2 months to make this picture.
The only problem is - after it was framed and covered in glass it became impossible to photograph it with a camera. So, on the last picture you can see a slightly "ghosty" image of the final version (and my cat, Belyash

(the picture, not the cat) 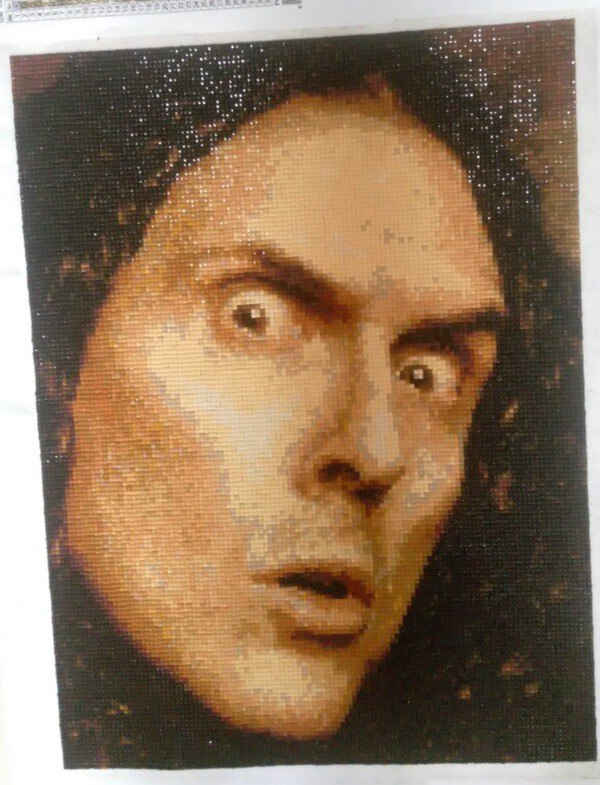 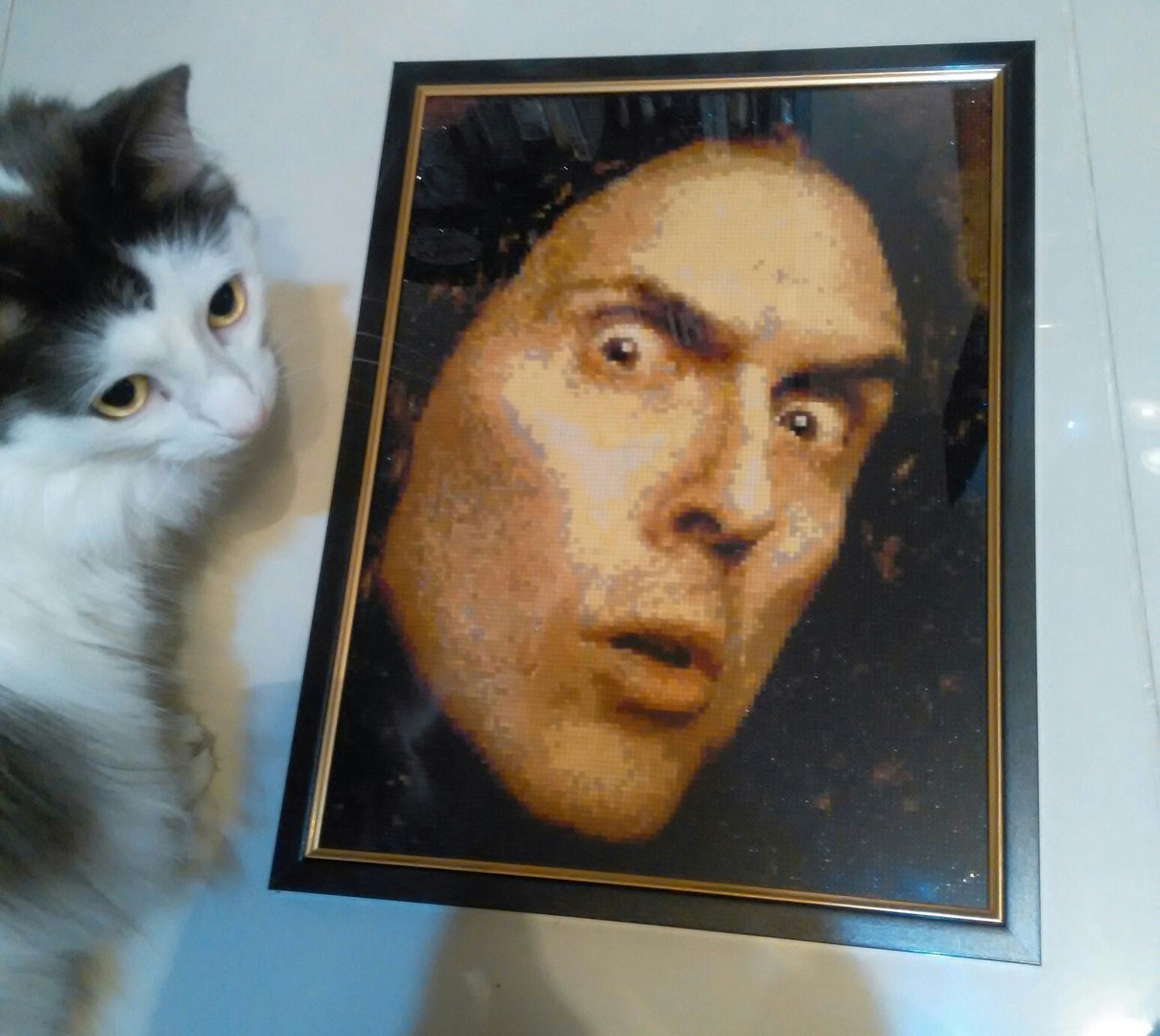 So it sends you the colors too? Its like a paint by number then. Oh and he didn't just like it, he loved it. I didnt get his initial reaction on video because I'm an idiot and hit photo instead of video, but he was floored when you pulled it out

minnick27 wrote:So it sends you the colors too? Its like a paint by number then.

Yeah, kinda like painting by numbers/cross-stitching for lazy people


minnick27 wrote: Oh and he didn't just like it, he loved it. I didnt get his initial reaction on video because I'm an idiot and hit photo instead of video, but he was floored when you pulled it out

That's ok!! You hit the right button eventually, didn't you?

Better late than never! I really don't know what would I do if there was no video at all (my brain does not do a good job remembering stuff while in shock

) and thanks to you I have some real memories!
And in the video you can hear him saying something like that he might hang it inside the tour bus.. well, I totally understand if he just said it to be nice, but if he really hangs it there - it would be, like, absolutely crazy and make me explode from happines.
Top

Margarita,
I'm so impressed with the amount of time it took you to do this intricate piece of artwork.
Amazing!!!

By the way, your cat is adorable!
Top
Post Reply
322 posts