Ladies!!! Have you had this problem?? You love Weird Al SO much that you want to buy one of his fancy t-shirts, but almost every shirt is made to fit a man or unisex style!!! Now, if that's what you like, that's perfectly fine, but I've been getting pretty fed up with this while continuing to collect shirts anyway. For me, the shirts do not fit right and are restricting and uncomfortable and unattractive. How do you profess your love of Weird Al while looking cute at the same time??

Ladies, I introduce you to UPCYCLING! AKA taking a pair of scissors and cutting up a bunch of shirts. Here, I will show you some examples: 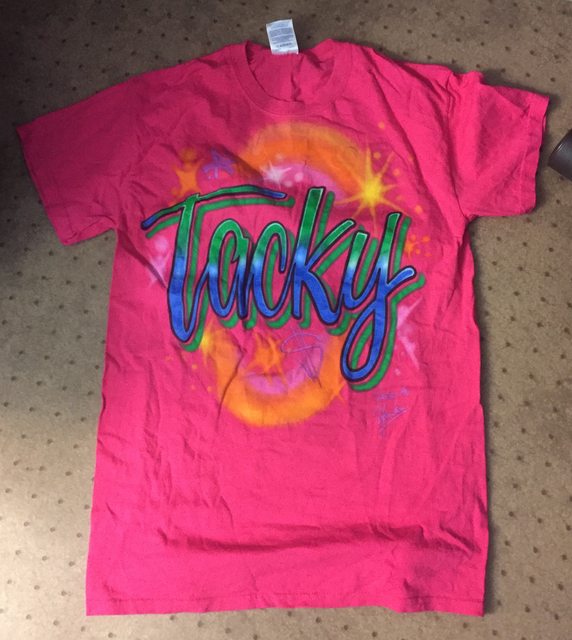 No one really wanted this Tacky t-shirt, but everyone got it anyway. Too pink for a lot of guys, but it has a mens fit so it's unappealing to a lot of girls. I feel like they've since added a ladies style Tacky tee, but you can only get it at concerts, and the one time I tried to get one they were already sold out. (Psssst, add more ladies style shirts.) 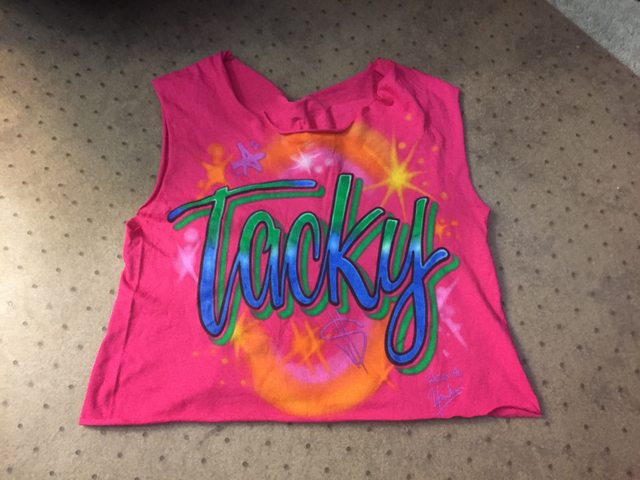 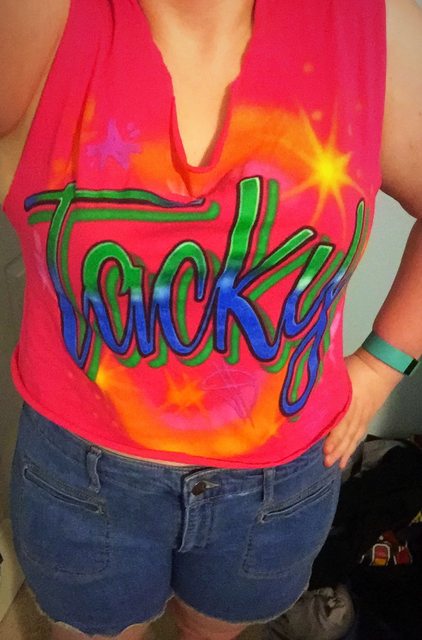 Another classic example for anyone who had Mandatory VIP last year is this shirt: 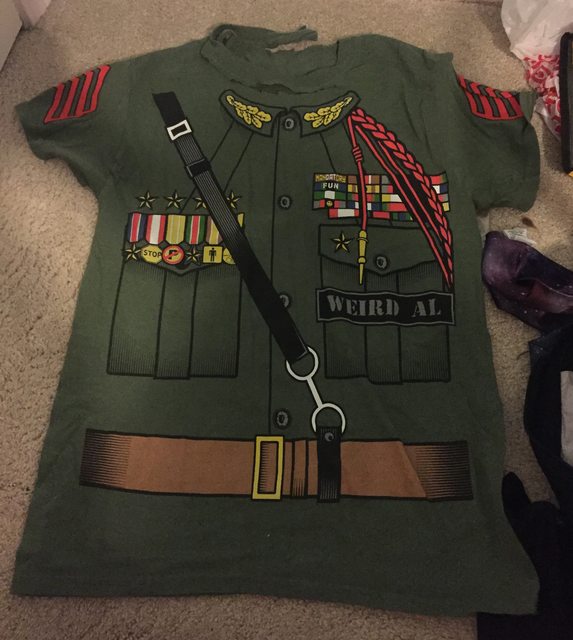 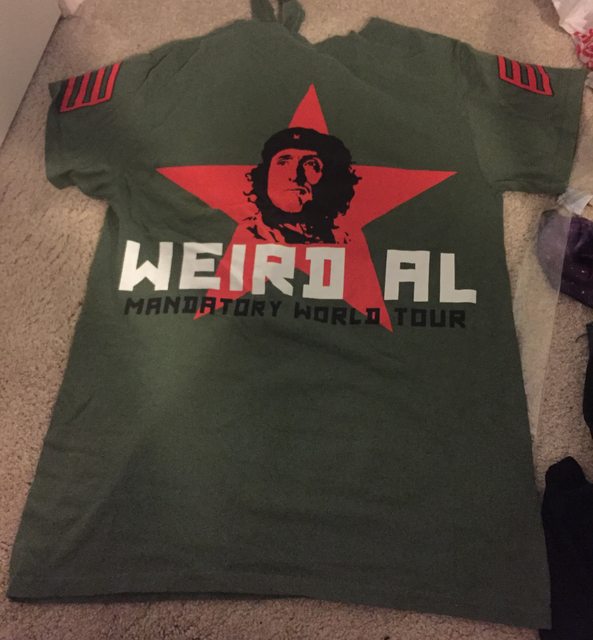 (As you can see, I was too excited to make this shirt wearable that I started cutting away at the collar before actually taking the before pic.)

Fear not, as this shirt can be made to look a little cuter! 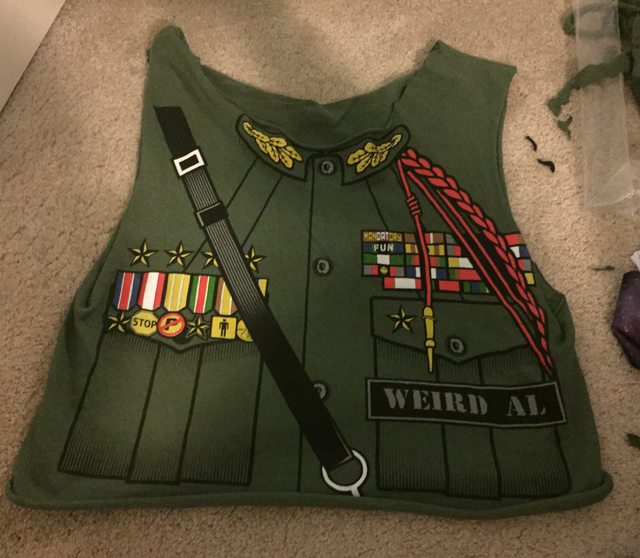 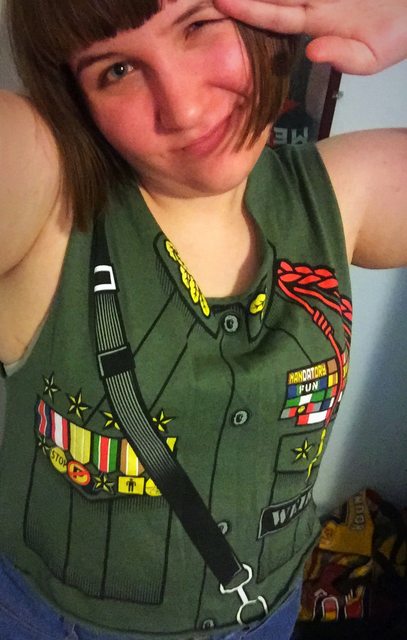 With this being the "front" but literally who cares, just turn it around and cut more out of the collar aaaaand 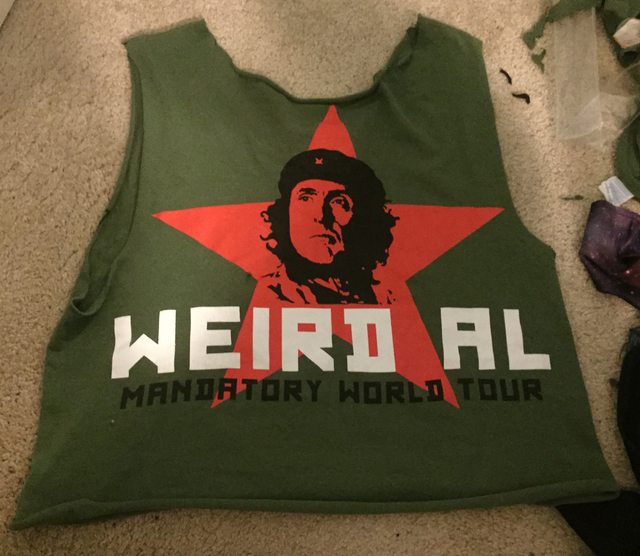 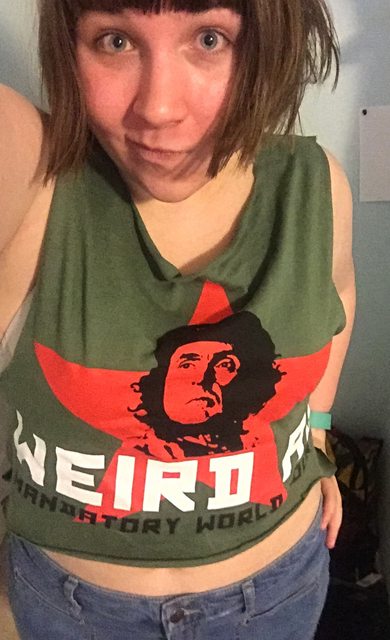 I've upcycled five Weird Al shirts so far, actually including a girls style White & Nerdy tee! I always liked that shirt because it actually fit right (until it didn't because it was a small, whoops) and was soft and stretchy, buuut the material was a bit different and I got a little too scissor happy and well 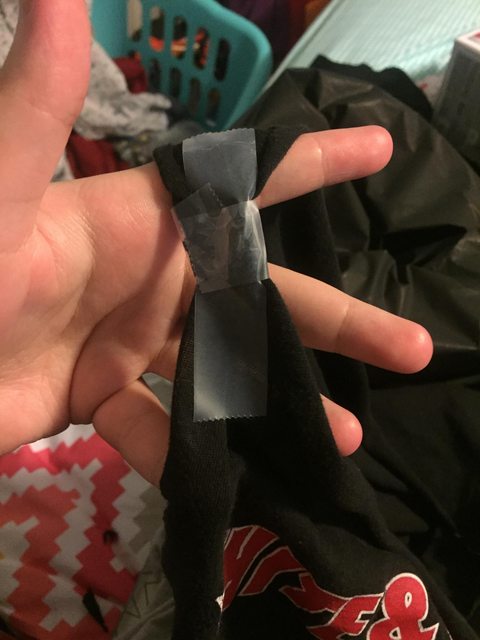 Sewing will actually be required now. Here's what it looked like before I decided to cut off the sleeves after all since they were kinda tight and before I stupidly cut the tag out for no reason and made a hole in the collar so I had to cut the collar out of that shirt anyway even though I wasn't planning to and well anyway 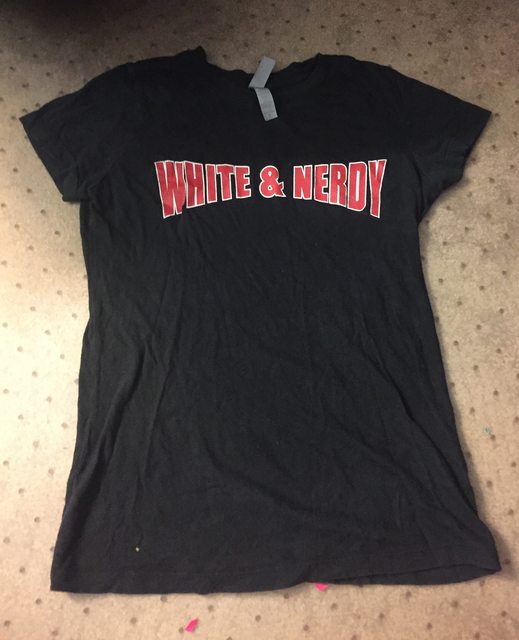 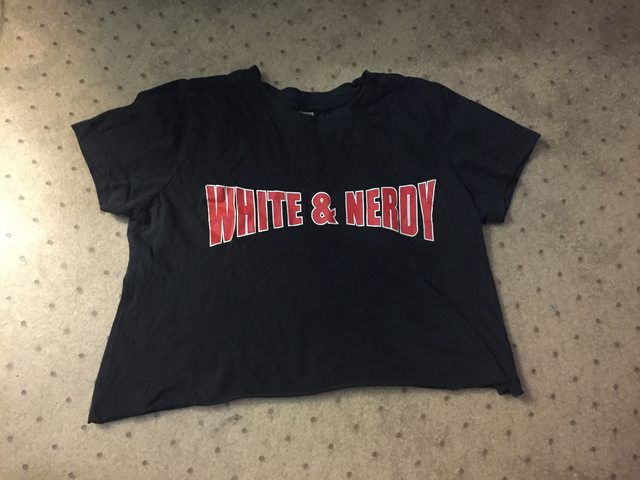 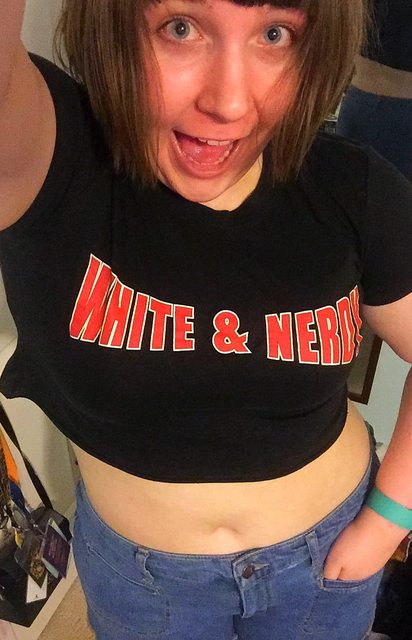 I kinda miss this version but I just could not stop scissoring. 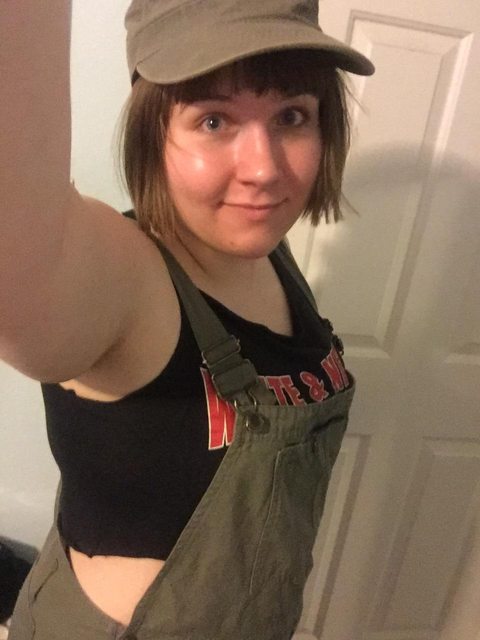 I will regret uploading pictures of my naked face but also yes, that's the Mandatory Fun hat that just happened to match the shorteralls I found at Savers, which is the whole reason I made the White & Nerdy tee into a crop top anyway. Everyone knows that shorteralls/overalls look super cute with crop tops. I noticed the hat and the shorteralls matched when I went out hunting Pokemon the other day. 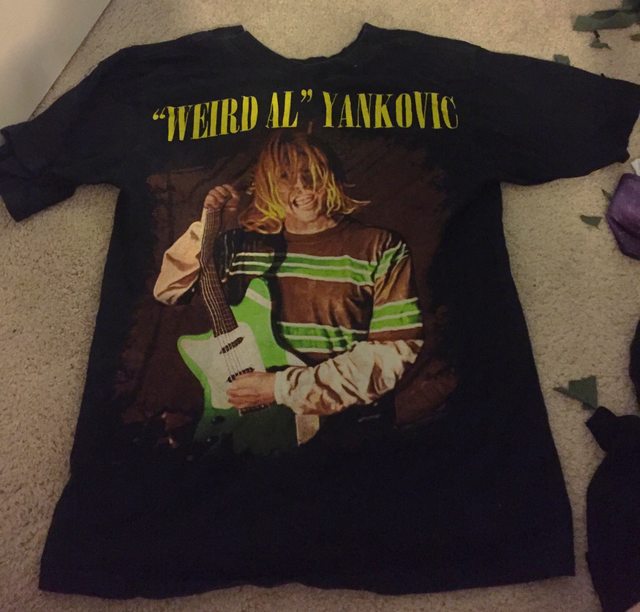 Do you remember this shirt? This is actually the back of the shirt. This is the front: 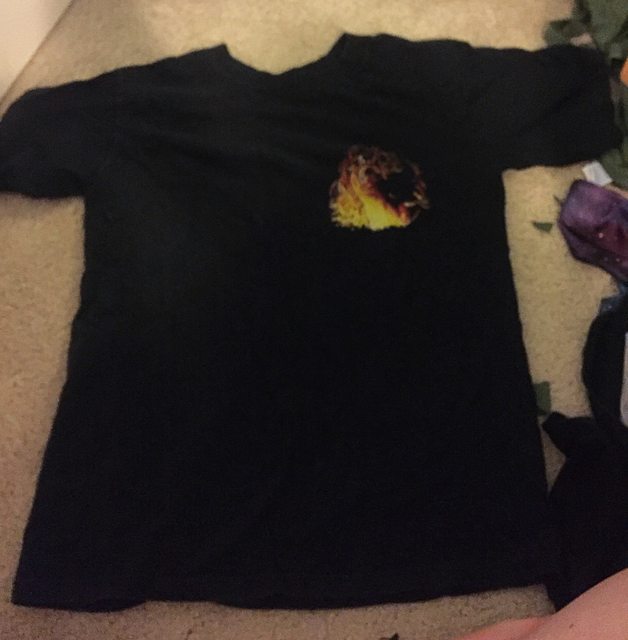 This shirt had actually been altered before with the help of my grandma, since I wanted to wear the back of the shirt as the front because OBVIOUSLY, so she moved the collar around with sewing magic but the sleeves were still kinda restricting. So uh, I just cut it all off! 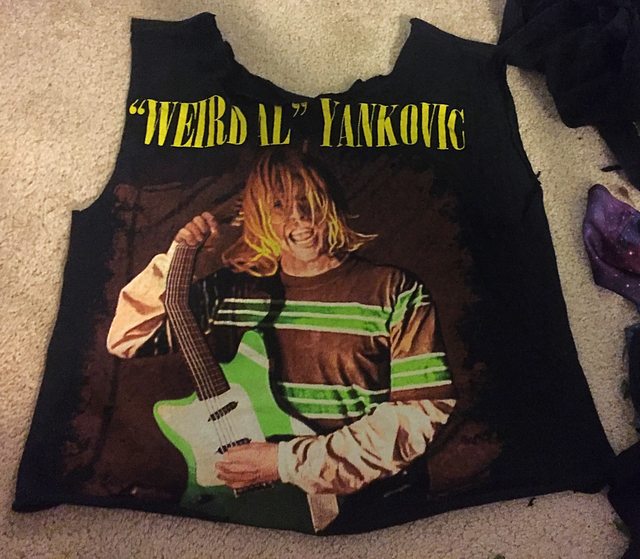 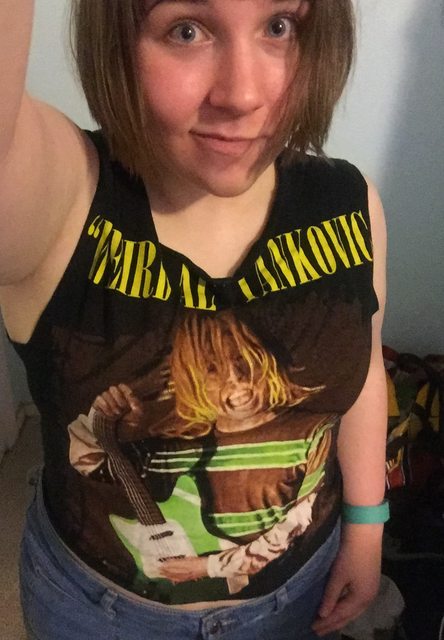 And the last one I've done so far: 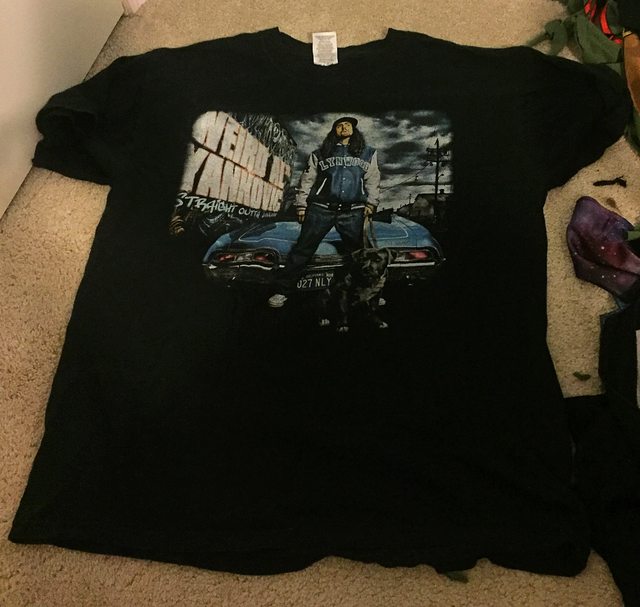 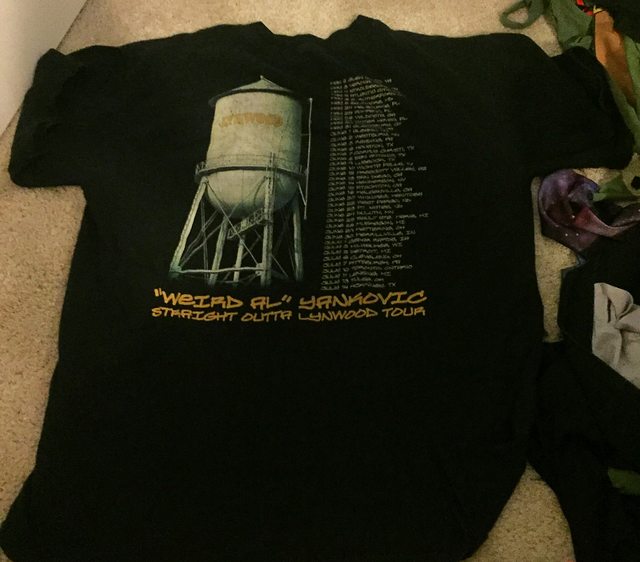 This SOL shirt might just be the first Weird Al shirt I ever got, but I haven't worn it since I was 13. I think we ordered it online even, since it doesn't even have the shows I went to on the back. It's pretty large and comfortable, but I never look at it like "YEAH, I want to wear THIS shirt!!" So, I altered it: 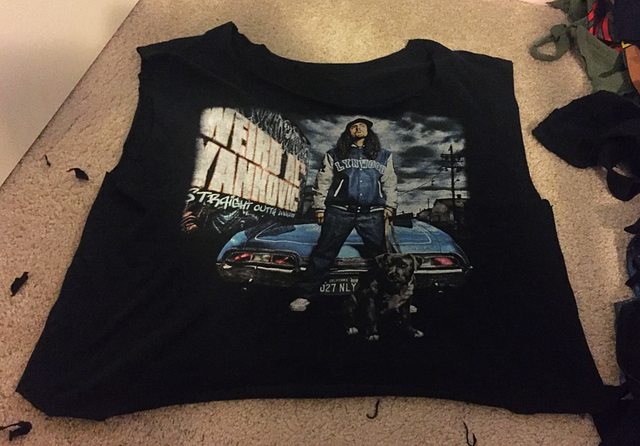 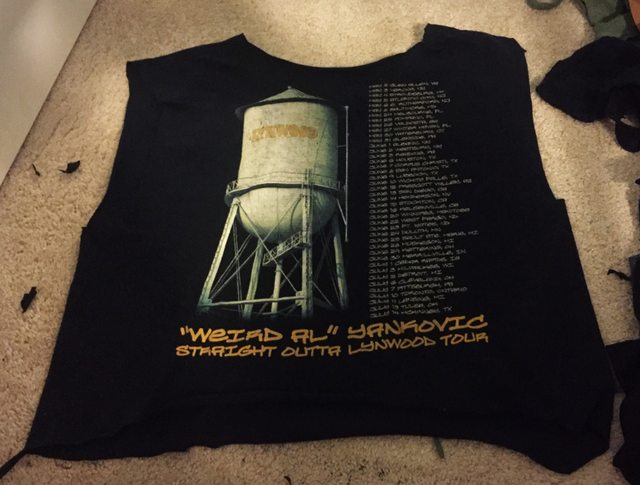 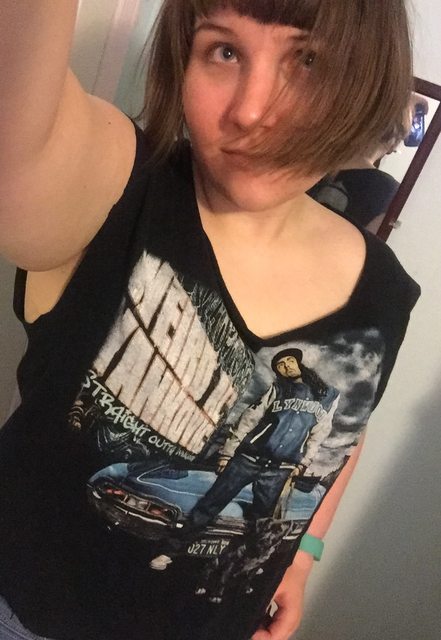 I'm actually pretty happy with how it turned out, even if Al's neck is broken here. I accidentally cut too far in the neck, but it turned out to be the best mistake I made on this shirt! 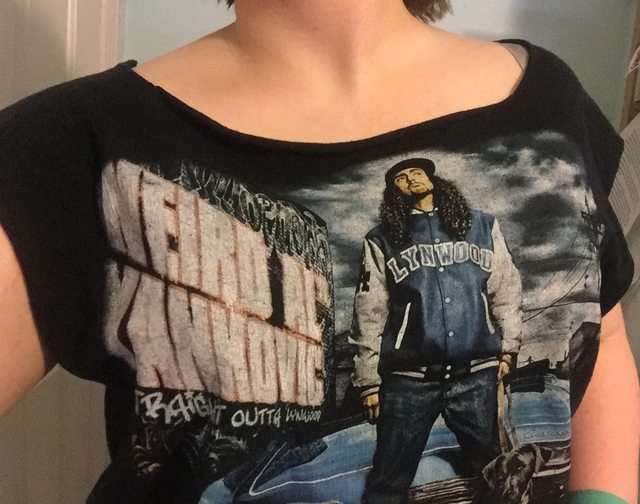 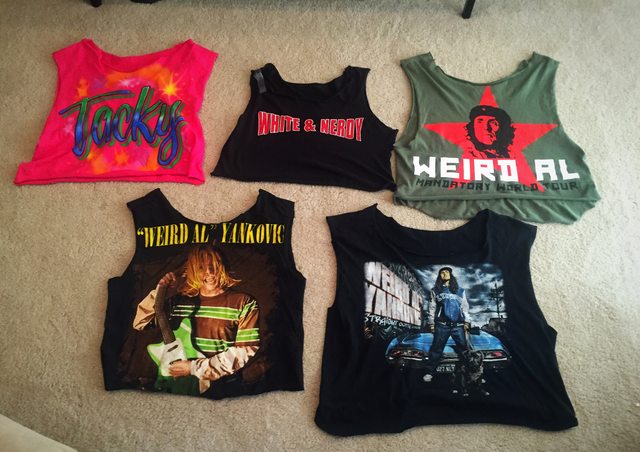 I actually feel like I can buy Weird Al shirts again!!

I just gotta keep cutting them up into bits! We found hope in a hopeless place, ladies.

You can gets girls t-shirts
Top

What tour was the Smells Like Nirvana shirt from?
Top

I am another Al fangirl in possession of an Al concert tee that is super ill-fitting and, sadly for me, crafted for what the common view of an Al fan is: a dude.


But this sad-shirt story has a happy ending now, thanks to you!!

Ali, this is creative, fun, and frankly a Godsend, as a way to fully enjoy these concert/fan tees and wear them.... like a GIRL! 8D Eeee, curve-hugging (almost) and all!)

And I must say- the result is SO CUTE! You are rocking those!

Thanks Alicia for this awesome tuto!!

"The potatoes do not agree."
Top

I was afraid the neckline would not hold up without the proper reinforcements, but it did.
"Some nerds search Weird Al boards their whole lives and never meet anyone." - uwvark

At the concert I was at in Seattle they only sold men's shirts. I showed this to my mom and she turned the Word Crimes shirt into a ladies shirt.
Top

This is so creative and cool! They really do need to have merch in more sizes and styles, as people have different tastes and come in all shapes and sizes.

Maybe they should adopt a manufacture on demand system with many different styles you can get a design in, like at ProWrestlingTees, ShirtPunch and others. Pick your style, size, etc. and they will custom make your clothing and it's all licensed, so the artist gets their cut and everything.

The greatest thing a human being can do is make another person happy. If I can ever help do that for you, just let me know!
Top
Post Reply
8 posts • Page 1 of 1