Is AL-TV returning or did you find a nice interview? Just tell the folks here. 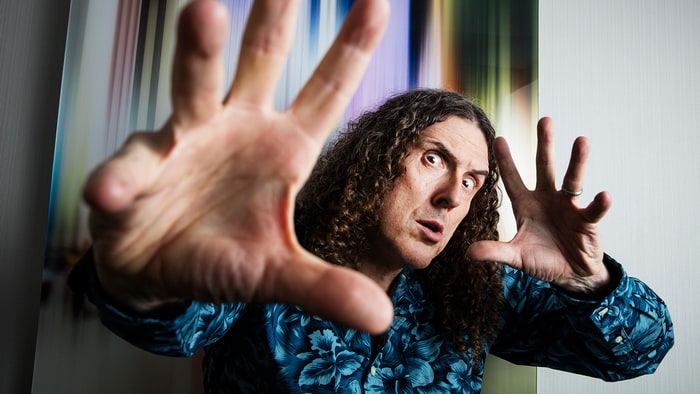 In addition to the parody musician's 14 studio albums, Squeeze Box: The Complete Works of "Weird Al" Yankovic boasts Medium Rarities, a bonus disc of Yankovic-curated, non-album tracks from across his career.

Squeeze Box reissues all 14 newly remastered albums on CD, 150-gram vinyl and digitally, with six of Yankovic's albums being released on vinyl for the first time as part of the set.
True to its name, the set is housed in a package that's a replica of the titular instrument, Yankovic's beloved accordion, with each album stored in one of its bellows. 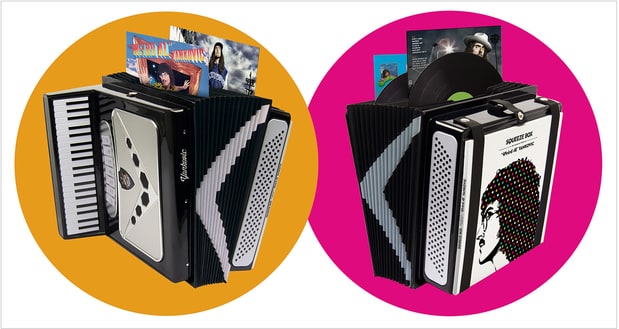 The set also features a 100-page book packed with rare and unseen photos and memorabilia from the legendary parodist.

Fans can pre-order Squeeze Box via Yankovic's PledgeMusic page. Fans who order early will receive exclusive Yankovic updates and other bonus content. The set is scheduled to arrive in the fall of 2017.

Hear All 77 Covers 'Weird Al' Played on 2018 Tour
From "Smoke On The Water" to "School's Out," hear snippets of every cover the parody king performed this year

Earlier this week, "Weird Al" Yankovic wrapped up his Ridiculously Self-Indulgent, Ill-Advised Vanity Tour after 77 shows across North America. It was unlike anything he'd done in his long career, setting aside nearly all of his famous parody songs (with the exception of a quick medley at the end) and focusing on his original compositions.

"I'm at a point in my life and career where I can do whatever I feel like doing, regardless of whether it's commercial, or whether it's something people actually want to go see," Yankovic told Rolling Stone shortly before it started. "I know this tour is going to be held in high regard by the hardcore fans, but more than anything, this is for me and the guys in the band because this is a tour that we're going to really enjoy doing."

The encore section of every single show kicked off with a different cover song. They ranged from classic rock hits ("Free Bird," "Cinnamon Girl") to punk classics ("God Save The Queen," "I Wanna Be Sedated") and 1970s AM Gold ("Close To You," "Fire & Rain.") He never did the same song twice, giving his longtime band a great chance to showcase their incredible range. Now that it's done, he's put together a 27-minute YouTube video containing snippets of every song in sequence, kicking off with "Smoke On The Water" on February 27th and wrapping up, appropriately enough, with "School's Out" on June 10th.

"Weird Al" is taking a long deserved break for the rest of the year, but he's already looking ahead. "Al and the band will be back out on the road again (with a much different kind of tour) in 2019," a new message reads on his website, "stay tuned for more details!"
Top

For about eight seconds near the end of "Weird Al" Yankovic's Thursday night show at Harlem's Apollo Theater, it looked like he was going to actually do something serious. "It hasn't escaped us how very special this night is," he said. "We are so humbled and honored to play at the world-famous Apollo Theater. It's such an amazingly rich and astonishing history here that it boggles the mind. And we want to pay tribute to that history. We felt like we couldn't leave tonight without playing this song for you."

Was he going to play a James Brown song? Maybe something by the Temptations or B.B. King? Was the author of "I Think I'm A Clone Now" and "Living With a Hernia" really about to do something sincere? But then Yankovic's keyboardist Rubén Valtierra kicked into the opening notes of the Carpenters' "Close to You," perhaps the whitest song in the history of white music made famous by the whitest of white groups. And Al didn't just sing a little bit of the 1970 soft rock hit and then shrug the rest off. He sang the whole damn thing, holding back a devilish smirk the whole time.

It was the most hilariously surreal moment on an evening full of them. This is no ordinary "Weird Al" Yankovic tour. An ordinary "Weird Al" show would be a carefully choreographed parade of his hit parodies complete with costume changes and video interludes. This is the Ridiculously Self-Indulgent, Ill-Advised Vanity Tour, where all attendees were explicitly warned that "Al's set list will be comprised almost entirely of his original (non-parody) songs."

It was a bold move, but it didn't stop the faithful from packing the theater in their vintage "Weird Al" T-shirts and waiting breathlessly to see what deep cuts he planned on digging out. One man probably spoke for much of us in the crowd when he casually remarked to a friend, "High school wasn't exactly the best four years of my life." But had high school been a nonstop party, we probably wouldn't know every corner of the "Weird Al" catalog; every forgotten tune from Off The Deep End; every pre-fame Doctor Demento-era song and every single moment of his 1989 big screen masterpiece UHF.

It meant we were ready for whatever Al was willing to serve up when he walked onstage after a hilarious opening set by comedian Emo Phillips, sat on a stool between guitarist Jim West and bassist Steve Jay and began singing "I'll Sue Ya" from 2006's Straight Out of Lynwood without a video screen, costume or any sort of bell or whistle. From there, he bounced around at random to various obscurities from his catalog; from the epic "The Biggest Ball of Twine in Minnesota" to the reggae-infused "Buy Me a Condo" to the 17 insane seconds of "Let Me Be Your Hog" from the UHF soundtrack. More than a handful of people sang along to every single word, no matter how psychotically obscure the song.

But the "no parody" rule didn't exclude style parodies from the show. Early highlight "CNR" (an ode to Charles Nelson Reilly) is written in the style of a White Stripes song, while "Velvet Elvis" sounds like a combination of about eight different Police songs and "Bob" - a brilliant concoction of palindromes - is delivered like a mid-1960s Bob Dylan tune. They were all showcases for Yankovic's amazing vocal abilities. One minute, he's screaming like Jack White and the next he's channeling Dylan or Sting. Oh yeah, and he's playing accordion throughout all of it.

The "almost entirely" clause of the "no parody" agreement kicked in at the end of the main set when the band began playing Eric Clapton's acoustic intro to his Unplugged remake of "Layla." It was briefly baffling until the vocals started: "How come you're always such a fussy young man/Don't want no Cap'n Crunch, don't want no Raisin Bran." It was his 1984 breakthrough hit "Eat it," but sung entirely to the tune of acoustic "Layla." It was the beginning of an an acoustic greatest parody medley ("I Lost On Jeopardy," "Amish Paradise," "Smells Like Nirvana," White & Nerdy," "I Love Rocky Road," "Like a Surgeon") with each song limited to about 30 seconds. At the very least, nobody could walk out of the place claiming they didn't get to to hear at least some of the biggies.

For the grand finale, however, he treated the crowd to a faithful rendition of "The Saga Begins." It's one of his greatest achievements. Nobody else could pack the entire plot of Star Wars: Episode I - The Phantom Menace into a five-minute parody of Don McLean's "American Pie." Nobody else could work the word "midi-chlorians" into a tune or come up with the lines, "And in the end, some Gunguns died/Some ships blew up and some pilots fried/A lot of folks were croakin'/The battle droids were broken." He'd taken a truly shitty movie, a cheesy song from 1971 and all of us proud dorks sang along like it was "Piano Man" at the end of a Billy Joel concert. He's a talent like no other.

Next time "Weird Al" tours he'll probably bring the "Fat" suit, the "Amish Paradise" costume and the grungy cheerleaders from "Smells Like Nirvana." But hopefully he'll find a way to incorporate some of these lesser-known tunes. As he's seeing night after night, there's a big audience for them and, contrary to the name of this tour, there's nothing self-indulgent or ill-advised about breaking them out.