Killingsworth wrote:My best guess is that Al and the band booked this studio time long before all the dates for the "Vanity" tour were booked/confirmed. If this song he's recording is just a new original, he probably also wrote that well in advance of the tour as well. If neither of these things turn out to be the case, then I'm sure Al still knows what he's doing.

No chance they booked the studio so many months out. This is definitely to record something to accompany the tour. The question is original or parody, and given the nature of this tour it would be weird if it wasn't an original.
I couldn't tell a dirt clod from a plate of caviar.
Top

All right! Very excited to see what Al has come up with. Like others have said, we're probably getting an original here, but if it's a parody (or even both?) maybe it'll pop up near the end of the set. Didn't Al say that near the end they'd "do something else?"
And Peggy
Top

I just saw Bermudas' photo where Jim was clearly with them. The photo Al shared only showed him and Steve.

I only bring this up because I've noticed a trend on the last few albums where Jims' guitar work is most prominently displayed on the original tracks.

On the parodies however, he has been more and more relegated to just programmed keyboard work as the songs Al has chosen to parody in recent years are increasingly synthesized and have less and less guitar parts.

Hell, "Inactive" was really the only parody he played guitar on at all on the last album. Also, Al said in an interview around the time of "Alpocalypse" that when they were recording "Perform This Way", Jim just showed up to the studio to hand Al a DVD with his preprogrammed keyboard parts for the song.

I think this makes an even stronger case for whatever they're recording being original rather than parody. I get the sense at this point in time that Jim must be investing this studio time with the whole band together in laying down his guitar parts in new songs Al wrote himself.
Life is a bowl of three-legged salamanders swimming around in an infinite ocean of strawberry jello...
Top

I also think that they are recording at least one original based on the looks of the work going in to it. 1) They've been rehearsing (yes, for the tour. But, they always rehearse originals before recording them, and hardly ever rehearse parodies before the studio time.) And 2) the studious look in the pics denotes (in my opinion) more effort/collaboration/planning than parody.

Just my thoughts. I would hope for several originals and parodies.
Top

On the off chance that Al is currently recording a brand new parody of a current mainstream hit, what songs out there right now do you guys think Al could be tackling?

I decided to take a look at the Billboard Top 40 Pop Charts today in light of Al's little social media announcement.

Out of the songs at the top that have already peaked at number one and seem to have been trending for a while, the songs I could see him parodying the most easily (and yes, I have actually heard them as well) are "New Rules" by Dua Lipa, "Perfect" by Ed Sheeran and "Havana" by Camilla Cabello.

Besides that, I remember hearing about how big a hit "Bodak Yellow" by Cardi B was from late last year. I could see him wanting to take a whack at that one just on the basis of it being a rap song. I could also see him wanting to do something from Taylor Swifts' "Reputation" album as much as it seems like old news by now.

Of course, I'm mainly bringing the possibilities up for the fun of speculation now that we know for sure new songs are somewhere out on the horizon but also that I feel they're the most educated guesses I could make.

The prospect of a new parody right now is a pretty big "if" but IF new parodies are being turned out right now these may be the songs with just the right amount of legs to be parodied at the moment. I believe these are the songs that have been out just long enough for Al to have watched trend their way to number one before Al went and obtained permission from the respective artists to have fleshed out a concept and written a full set of lyrics for by now.
Life is a bowl of three-legged salamanders swimming around in an infinite ocean of strawberry jello...
Top

I really hope it's just an original. They could even be recording stuff for the upcoming tour just to see how it sounds y'know. Just ball parking, but it is possible.
What a racket they're makin', Jack, they keep me up at night playin' their electric guitars!!
Top

I'm thinking if it is a parody, and the band is playing non synthesized instruments on it, there's a strong chance it could be "Feel it Still" by Portugal. The Man. It's one of the few recent big hits by a "rock band", and Al even performed live with them back when he did the Bonaroo announcement in 2013, so there is an existing connection.

The other parody possibility would be Al going back to the classic rock song well and doing another Star Wars song.
Top

Yeah, if it's a parody at all it must be a classic rock type song. Portugal, The Man are great but they strike me more as a "style parody" band.

I had forgot to add this earlier but I was also considering the (now seemingly very distant possibility) of Al parodying "Sorry Not Sorry" by Demi Lovato. I don't know how that song charted but it has been getting overplayed to the point where it is in commercials.

For some reason, I could see Al turning that one into a Pancreas/Hernia/Brain Song type number where he tries to show off all his knowledge on one specific, obscure subject.
Life is a bowl of three-legged salamanders swimming around in an infinite ocean of strawberry jello...
Top

Al's not really recording anything. He just wanted to give us something to talk about on WOWAY.
You have quickly thought up such matchless phrase?
Top

Teh Dingo wrote:Al's not really recording anything. He just wanted to give us something to talk about on WOWAY.

Yep, you're right. Al just texted me this picture. 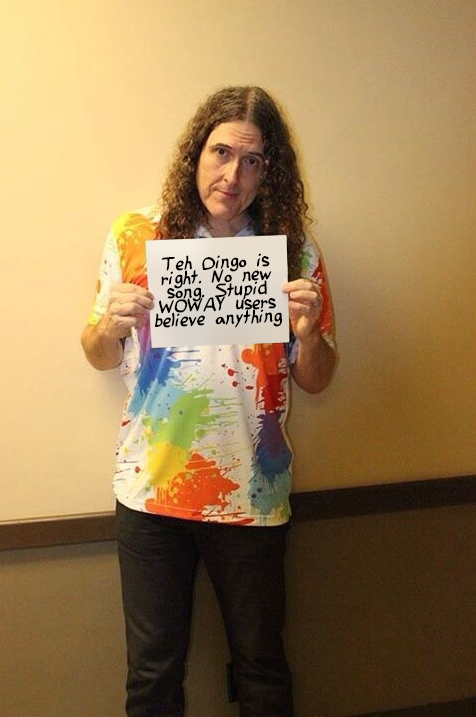 "Be the climate, not the weather." -Al Yankovic
Top
Post Reply
81 posts